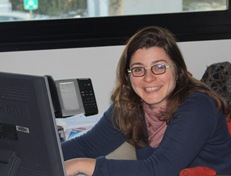 Soizic Morin, research fellow at IRSTEA [1], studies diatoms. These unicellular microalgae, present in large quantities in all aquatic environments, form the basis of food webs. "There are a lot of diatom species with different ecological preferences. Studying them gives a very accurate assessment of the ecosystem's state of health. I am working on the toxic impacts of contaminants in the broadest sense, such as pesticides or metals, on the different species of diatoms. I'm looking for specific markers, called biomarkers, of toxic contamination.

Her career did not predestine her to working on diatoms. She began to study the subject during an internship in Australia during her studies at the ENITA Bordeaux [1] that she had taken "primarily for the international experience". When she returned to France she contacted Michel Coste, Research Director at CEMAGREF [2] and diatoms became her speciality. Soizic Morin recognises that she has had a rather unusual career path and that she has “theoretical gaps but the technical aspect of my training and the adaptability we are taught has helped me!  Today, I think I have a less Manichean vision, especially regarding the study of the impact of pesticides.  Understanding the objectives of farmers, their constraints, and so on has helped me put this issue into perspective".

Pesticides are also at the heart of the IMPACT project supervised by Soizic which was selected during LabEx COTE's first call for research projects. "The idea of ??diagnosing the impact of toxic substances requires knowledge of the influence of environmental factors that can be preponderant", said Soizic. IMPACT is a collaborative project with the UMR EPOC [3] and IFREMER Nantes, to characterise the interaction between dissolved organic matter and pesticides (coordinated by Edith Parlanti - EPOC) to get an idea of their ecotoxicology on continental (coordinated by Soizic Morin - Irstea) and marine (coordinated by Sabine Stachowski-Haberkorn - IFREMER) diatoms. "We've never worked together before and this project is highly complementary and transversal. We are even considering further collaboration especially on an extension of the chemistry and dissolved organic matter part of this project.

Collaboration between members of LabEx COTE partner teams does not stop there. Soizic is also a member of the LabEx's group of scientific managers along with Sabine Stachowski-Haberkorn. In particular, they manage the working group that has just been established following the first seminar on pesticides in conjunction with Pierre Labadie (EPOC). Soizic Morin sees her managing role as an interface between the scientific community and LabEx COTE. "We must all work together to identify the needs of our communities that could be common and unifying for COTE" concluded Soizic.