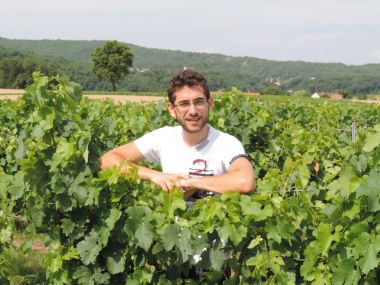 In the process of doing his doctoral thesis in the context of the FLUX.com research project, which is financed by LabEx COTE and brings together the BioGeCo [1], SAVE [2] and ISPA [3] research units, Thomas Fort is a flourishing doctoral student looking for openings.

Born into a winegrowing family, Thomas has always been drawn to the world of vineyards and wine. However, he steered his degree and the first year of his Masters at Toulouse towards biology and ecology. Following his Masters 2 in biodiversity, ecology and evolution at Montpellier, he could not find a subject for his thesis. "My CV lacked a specialization" he admits, leading him to return to Toulouse for a second Masters 2 in biostatistics and modeling of ecological systems.

It was during a seminar that he met his future thesis directors, Cécile Robin and Corinne Vacher… in search of a doctoral student. "We hit it off straightaway" and the proposed subject – the transfer of forest microorganisms to vines - immediately appealed to him on account of the project's multidisciplinary dimension, its innovative approach, and of course the connection with vines.

His work involved collecting leaves from various plots and analyzing them in the laboratory. This was a complex task, since the microorganisms (bacteria, fungi etc.) that he was studying could not be identified by the naked eye or even under a microscope! The only way of telling them apart was by their DNA. On the basis of a mixture of DNA, this metagenomic process enables the determination of the presence of certain species which have known genetic characteristics. Another factor is the structuring of these communities of microorganisms as a function of the environment, for example, linking it to the size of the surrounding forest.

"For me, being a PhD student is not just about focusing on the research project". Thomas is determined to take full advantage of the opportunities offered by his status: teaching, modules to enrich his scientific and general culture, international mobility... He also attaches great importance to communication and the transfer of scientific knowledge.

"I was looking for something general, an overview of everything that was done at LabEx", the PhD student explains. He believes that he was able to grasp "the spirit of the scientific research carried out at LabEx" and adds that he particularly liked the social sciences aspect transverse to all of the ecosystems.

Outside of the courses, "there was lots of discussion, with a real group dynamic". These exchanges often focused on science, methodology, or statistics... all in a relaxed atmosphere. "Discovering so many cultures, countries and languages has been great", he marvels. "Really good socially, with a chance to practice English and make contacts for the future."