Hugues Bijoux, transfer and development engineer, a role at the interface between research and socio-economics 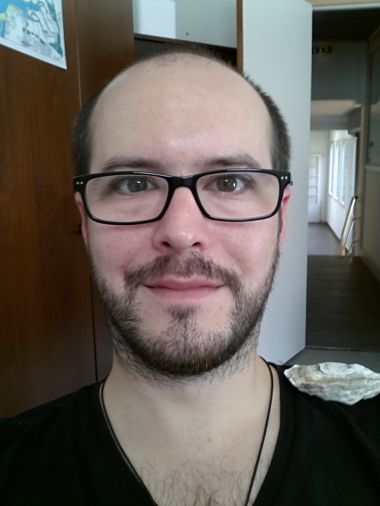 Hugues Bijoux's task is to pass available scientific knowledge on PAH contamination [1] in Arcachon Bay between the EPOC research unit [2], Ifremer's [4] LER laboratory [3] in Arcachon, the Adour-Garonne Water Agency and socio-economic stakeholders in the Bay such as the SIBA [5] and the CRC [6]. Project title: "Polycyclic Aromatic Hydrocarbons in the waters of Arcachon bay - synthesis of available data and assessment of sources". A galvanizing new challenge!

A few months after the oral defence of his thesis in February, the new doctor Hugues Bijoux was recruited as an engineer at UMR EPOC, for a project selected in the context of LabEx COTE's transfer and development component. A pure product of the University of Bordeaux, he followed a fairly traditional biology path through to a Bachelor's and Master's degree in the study of the operation and dysfunctions of aquatic ecosystems. It was during his two course projects that his future took shape. At the end of the first year of his Masters, he studied the presence of pesticides in the water in Arcachon Bay. This project, firmly in the field of chemistry, influenced the second, at the interface between chemistry and biology: a study of oysters in Arcachon Bay as part of the Ascobar project [7]. The "icing on the cake," he confides was his thesis, in which he studied the response of Crassostrea gigas cultured oysters to contaminants in Arcachon Bay, in the context of the Osquar project [8].

Arcachon Bay is a priority study area for LabEx COTE, as a living and reproductive environment for sensitive, emblematic species. It is also exposed to numerous anthropic pressures. With knowledge of the stakeholders and issues, excellent human relations skills, having the "Bay spirit" despite being from Bordeaux, Hugues was the ideal candidate for the position.

"It was a chance to hang up my lab coat and pursue other aspects of the research," he explains enthusiastically.

His work for the coming year: to review studies of PAHs in Arcachon Bay carried out over the past 20 years and share the results with LabEx COTE's partners. "There is a staggering amount of data that is not necessarily homogeneous and which has not yet been properly compared and put into perspective," he explains. On the basis of this painstaking analysis, he will attempt to construct some predictive scenarios and to identify the sources of these pollutants, and most importantly, make all of the results accessible to administrators and users.

To achieve this, he must deliver three things. A very technical in-depth review, covering all the details of the study, a summary report of several dozen pages and a data sheet for elected representatives and decision makers.

For a year, Hugues will juggle work with UMR EPOC's LPTC team and the SIBA in Arcachon, not to mention a few visits to Ifremer and the CRC in Arcachon, and the Adour Garonne water agency in Bordeaux. He sees this positioning as an advantage. "The administrators have a very keen awareness of these issues. Working in their offices will enable a real discussion" he concludes.

[4] French Research Institute for Exploitation of the Sea

[8] Oyster farming and quality, a dynamic approach to Arcachon Bay